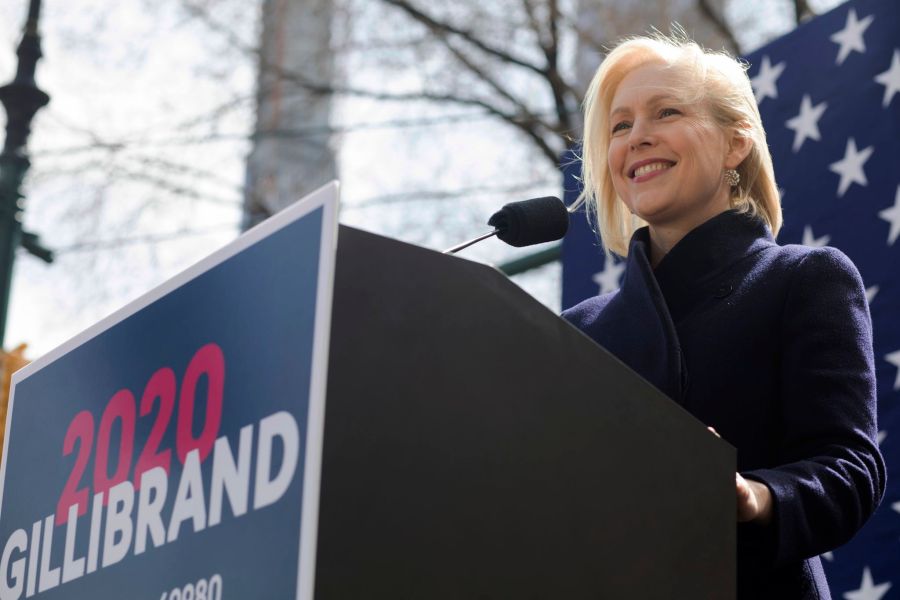 Of the multitude of candidates hoping to take on the current president in the 2020 election, she’s got my support. Here’s why.

(Before we go there, though, a disclaimer of sorts: There are a bunch of good candidates who’ve declared for the presidency that I’d support if they win the nomination. But KG just stands out for me.)

First, she has been very active in supporting and advocating for survivors of relationship and sexual violence. She has put a lot of time into the cause, well before the #MeToo movement really took off in the autumn of 2017. Readers of this blog may remember I said before the 2016 election that there’s no issue more important in the U.S. than gender-based violence. I’d expect that as president, KG will continue to give it the attention it deserves, as she has for quite some time.

She’s not a one-note wonder, either. Based on what I’ve seen, KG strikes me as having a knowledge of issues that runs both wide and deep. It takes a sharp mind to handle that amount of detail. I don’t know about you, but I like having a president who is smarter than me. I feel concerned when I seem to understand things more than the prez does.

Another reason why I support the senator: She’s been in Congress long enough to know what works and what doesn’t when it comes to translating values into law. (She was first elected to her upstate New York congressional seat in 2006, and she became a senator in 2009, replacing Hillary Clinton when she became Secretary of State.) KG knows how the political game is played – in a good way – and based on her significant accomplishments in getting legislation passed, she’s good at it.

She’s no stranger to the international political game, either. American foreign policy is, IMO, one of the most neglected topics on the campaign trail at this point, though we are still early in the primary process. KG’s time with the Senate Armed Services Committee has put her in the thick of many discussions about America’s role in the world. It all will come in handy, because there’s a hell of a lot of relationship-repairing with our allies that the next prez must do. There will be a lot of “hell, no” messages to send the Macho Man of Moscow, too.

My support for KG isn’t just about her political experience. I like that she’s been curious about the world and its diversity of cultures for a very long time. Yeah, it’s kinda cool that she can still speak some Mandarin 30 years after studying abroad for a year in China and Taiwan (where her roomie was fellow Dartmouth student Connie Britton, later of Friday Night Lights and Nashville). But the facts that she majored in Asian Studies and lived on the Asian side of the Pacific Rim speak well for her.

Perhaps most impressive to me in recent months has been her ability to connect with a wide variety of people. Her congressional voting record has shifted in a more progressive direction over the years, which I appreciate. But she still seems to be able on the campaign trail to connect with independents and Republican-leaning folks. Coming from a traditionally conservative House district, where even now her campaign headquarters is based, probably helps her with that.

Easily demonstrating empathy helps with that, too. She doesn’t need any written reminders from her aides to step into the pain of her fellow Americans. And of course, empathy can be just for show, especially for politicians. But it seems to me that she must have a lot of genuine empathy, because how else could she establish quick and notable connections with so many different kinds of people? In just the last couple of weeks, she’s talked about Jesus’ parable of the talents with religious folks, discussed disaster relief with flood survivors, bantered about physical fitness with college students (arm wrestling one who challenged her – and winning), and spent time talking fashion with drag queens.

Of course, these types of people aren’t mutually exclusive of one another. But KG seems to relate pretty comfortably with a very broad spectrum of Americans, from the blue-jeans-and-beer crowd to the fancy D.C. dinner party set. And that’s something I’m not sure we’ve had in a president since Ronald Reagan.

Bringing Americans together, in all our messy diversity, requires more than bipartisan policy-making, although that helps. It needs more than big national goals to rally behind, like the space race of a couple of generations ago.

Bringing together Americans who distrust each other, and overcoming the suspicions deepened by politicians and pundits, requires a president who can help us understand each other. A president must be a translator, helping us to hear just how similar our core hopes and fears are, and how much most of us are decent folks who love our country. Then we can better aim together for win-win solutions to our problems, leaving behind the zero-sum approach that has characterized our national politics since the 1990s.

But again, that only happens if we have a president who can communicate effectively with the vast majority of our crazy diverse American people. And I’ve a strong hunch KG is the best candidate to do that.

Last but not least, I’m a KG backer because she’s a woman. No surprise there, right? Of course, I wouldn’t vote for her simply because she’s a woman, but given her strong qualities, that clinches it for me. If we don’t elect a woman in the next presidential contest, my older daughter will have gone through her entire childhood without seeing a president who looks like her. And that bothers me greatly.

There are actually more reasons I’m a Gillistan, including certain negative things I’ve observed about some of the other candidates. None are perfect. But many are good, and this list of qualities puts Kirsten Gillibrand ahead of the others in my view. I hope it’ll get you to think about supporting her too!