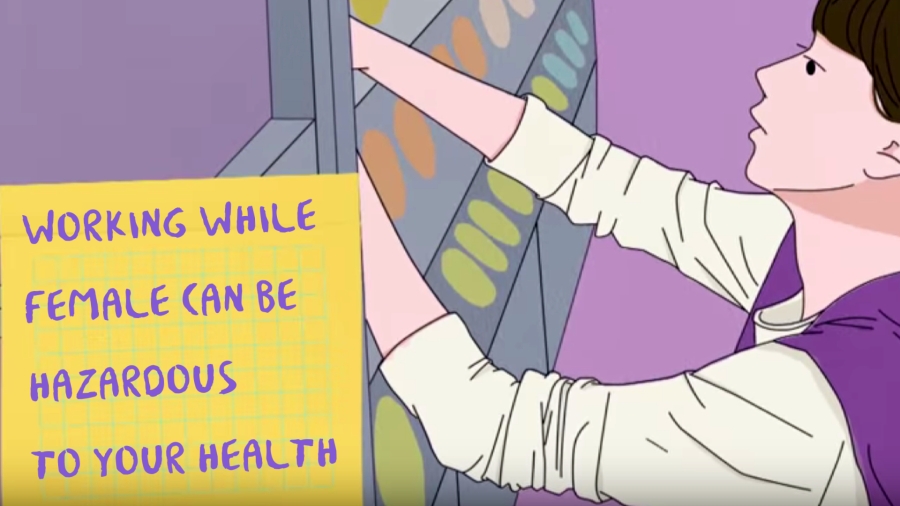 A friend of mine once told me how a stranger sexually harassed her at work. She was a pharmacist at a drug store like CVS or Walgreens; the perpetrator was a customer, who even lurked outside the store until she was done with her shift. When she came outside, he accosted her and made her feel truly threatened. It was definitely a traumatizing experience.

Maybe this kind of thing has happened to you as well; if not, it’s likely happened to someone you know. Sexual harassment occurs in every conceivable type of workplace, and in the restaurant/hospitality and retail sectors more than any other. Sometimes, the perpetrator is a boss or colleague. Other times, it’s a customer.

That’s the scenario Shin-hye faces during season one of It’s OK to Be Sensitive! Watch this nine-and-a-half minute webisode:

The episode begins with Shin-hye’s friends, the don’t-take-crap-from-anyone Chae-ah and the I’m-trying-to-disguise-my-crush Doh-wan, chatting with her at her part-time job, a convenience store much like 7-11. They express their concerns for her safety, citing all the “weird” guys who frequent the area. She tires of the conversation, which is only briefly interrupted by the sound of a clean-cut, nicely-dressed customer coming into the store.

After the title sequence, Shin-hye encounters two strange men in the store, one who wants her to guess what kind of noodles he bought previously, and a really disheveled one who wants to use nuts as currency to buy liquor. She laments the fact that many such oddly behaved men visit the store, making her feel uncomfortable.

We then see Shin-hye on a completely different day. A clean-cut, nicely-dressed man comes to the checkout counter. Oh, hey, it’s the same guy who came into the shop when Shin-hye’s friends were talking with her about safety! He asks her if she’d like to grab a drink with him after she gets off from work. She politely declines.

She scans his purchase, a single small boxed drink that costs less than $1 US. But when she extends her hand to take his credit card, he uses the moment to deliberately stroke her palm with his fingers.

She recoils. He smirks.

I want to punch him.

Later that night, Shin-hye spots creepy Mr. Clean-cut Nicely-dressed hanging around outside the store. Right then, her friend Ye-ji (the one who drew a firm boundary with her boyfriend about making a sex tape) arrives to relieve Shin-hye, apologizing for being late. Shin-hye points out her stalker through the window. They’re both quite frightened, and Shin-hye thinks that perhaps she should call the police, but she also worries that she just might have misunderstood the situation.

By chance, her goofy friend Ji-ho walks through the door at that very moment, a deus ex big tall guy. He poses as her boyfriend, walking her out of the store. But though he may provide her with some physical protection, Shin-hye still has defend herself emotionally. Mr. Clean-cut Nicely-dressed accosts them, calling her a “plastic bitch” and a “dirty bitch,” thus confirming for her that he was indeed lying in wait. The stalker, assuming Ji-ho is her boyfriend, warns him that she’s a cheat, willing to flirt with other guys behind his back.

It’s a classic gaslighting move used by abusive men to manipulate women they want to control. The abuser plays the victim and wields the guilt trip as a weapon, accusing the actual victim of being a cheater who came on sexually to him, when the exact opposite was true. The abuser also works to tear down his victim’s reputation in the eyes of her friends and significant others.

But Shin-hye isn’t taking it, remembering Chae-ah’s pep talk from a previous episode. She shows her own strength, letting go of Ji-ho’s arm and accusing her stalker of sexual harassment, saying they can show the CCTV video to the police. He responds by going off on a rant about “Korean bitches” claiming sexual harassment, much like men’s rights agitators are presently doing in South Korea and around the world as they push back against the #MeToo movement.

The creepy guy then looks up when he hears someone call out to him. It’s his brother-in-law, who comes over. Shin-hye takes advantage of the newcomer’s presence to ask if he knows Mr. Clean-cut Nicely-dressed. But before the new guy can answer, the stalker grabs him by the arm and high-tails it away, before Shin-hye can say what a sexually predatory creep he is.

Later, Shin-hye and Ji-ho are joined by Chae-ah on a park bench, the three of them reflecting on the scary situation that just went down. Shin-hye reveals that, to add insult to injury, when she later asked her manager for the CCTV footage to file a police report, he fired her. The episode ends with Ji-ho’s awkward, yet charming declaration of affection for Chae-ah, something that had been hinted at the beginning of this chapter in the series. What would a K-drama be without romance?

First, creepy stalker guys don’t have a particular look. It’s ironic that the outwardly “weird” men that Shin-hye and her friends were concerned about weren’t the ones who were abusive. It was the very respectable-looking dude with the hella good hair.

Second, Shin-hye’s stalker had been planning to go after her. He had visited the store at least once before, and he waited until she was isolated and alone to approach her. His purchase of the small boxed drink really seems to be his devised excuse to talk to her. These kinds of behaviors are common among sexual predators.

Third, what Shin-hye’s manager did is called retaliation and is illegal in both the U.S. and, due to strong recent political pressure, in South Korea. But it still happens, countless times each year. It’s really long been a common occurrence for women who’ve reported workplace sexual misconduct to suffer for simply telling the truth. Managers have sometimes taken action against a victim because they’re trying to protect the reputation of someone within the company, whether the harasser’s or his enablers’, or to prevent bad publicity about the company itself.

Fourth, it is hazardous to one’s health to work while female. 80 percent of sexual harassment complaints in the U.S. are filed by women. I’m not ignoring the fact that many men also face workplace misconduct, because what they suffer is just as terrible as what female victims experience. Yet the chances that a person will experience sexual harassment at work go up tremendously, 270 percent, when it’s a woman that we’re talking about. And in fact, the chances of dying on the job due to a former or current significant other’s violence increases by over 800 percent, when a woman is in view.

Regardless of your gender, if you’ve experienced sexual harassment in the workplace, you are most definitely not alone. As I mentioned earlier, thousands of American employees encounter such misconduct every year. Here are some steps you can take. And if you live in Southern California and need a lawyer, I highly recommend employment attorney Ramit Mizrahi, who was a fellow featured speaker with me at a HeForShe event hosted by the Los Angeles chapter of UN Women a few years ago. (Here’s what she said.)

For more info on workplace violence, the nonprofit/government collaboration Workplaces Respond has a ton of resources, from fact sheets to advice for employers and employees.

As for our Fab Five, more romance is on its way, this time for Shin-hye and a longtime admirer. We’ll pick up that story line in our next post!