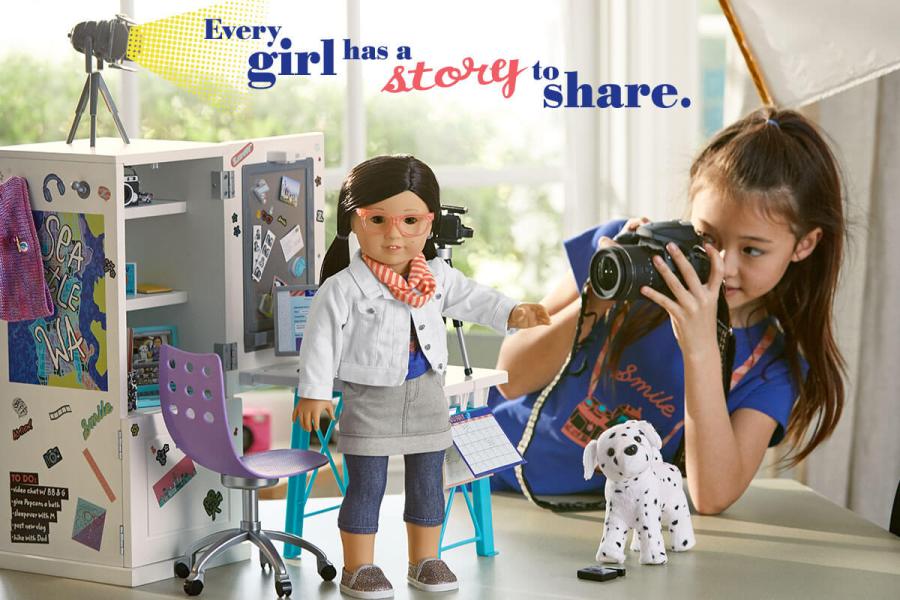 This is a sad post for me to write, one that I’ve been putting off for awhile.

It’s not breaking news, especially for fans of American Girl brand toys, books, and games, but American Girl (owned by Mattel) retired their Z Yang doll at the end of 2018. They also retired (their term is “archived”) the other named contemporary characters, namely Tenney, the country musician doll, and her band mate Logan, the first and only named boy doll in AG’s history. The doll for dancer Gabriela McBride, who in 2017 became the first African-American Girl of the Year, has also been retired after continuing to be available through 2018 – an unusual step for AG, which used to retire their GOTY after each calendar year. The doll for Latina aspiring astronaut Luciana Vega, 2018’s Girl of the Year, remains available in 2019, even as AG has introduced 2019’s GOTY, Blaire Wilson.

Readers of this blog may recall how elated I was in the spring of 2017, when AG premiered an Amazon Prime Video hour-long special based on an AG book by Lisa Yee about character Ivy Ling, featuring Nina Lu as Ivy, Gwendoline Yeo as her mom, and Tzi Ma and the late Elizabeth Sung as Ivy’s grandparents. Z Yang was introduced soon afterward, and that summer, Prime also premiered a half-hour special about her, featuring Zoe Manarel as Z. Diversity was breaking out in the AG world, including the addition of African-American historical doll Melody Ellison and the multi-racial lineup of smaller Wellie Wisher dolls, which included Emerson, an Asian-American doll, and Kendall, an African-American one.

All of this took place just a few years after many of us activists had raised strong concerns to Mattel about the Ivy doll’s retirement, which at the time, left no named Asian-American dolls in any of AG’s available collections. The new characters showed that the corporation heard us and responded!

Yet now, Z has been retired, though her books, including the one by a dear friend of this blog, Jen Calonita, are still available. (Read my interview with Jen here.) I suspect that the retirement of all three named contemporary characters (Z, Tenney, and Logan) was a business decision based on sales and arising from Mattel’s significant financial losses in recent years. The corporation’s declines have included big losses for its Barbie brand as well, and all of it is reflected in several years of turnover among top executives. In fact, AG supposedly was going to bring back one of its longtime characters, World War II doll Molly, out of retirement, something that AG periodically does with its more popular characters. But though I did see one in Costco before Christmas, it seems that Molly’s reintroduction has been put on hold for now, if not canceled entirely.

Do we AAPI activists need to raise a cry again to Mattel, like we did after Ivy was retired? Not yet, I think. Last year, AG introduced an AAPI historical doll, the Hawai’ian Nanea Mitchell, whose story begins in 1941 shortly before the attack on Pearl Harbor. Her books include a story line about a Japanese-American friend whose dad is arrested by the FBI and whose family experiences a hate crime. My girls have enjoyed the books and found them to be meaningful.

But still, Z’s “archiving” is sad, even though my girls never had the doll. Jen Calonita’s book (the first of the two in the Z series) and Zoe Manarel’s portrayal, as well as Z’s stop-motion doll videos online, introduced my family to a wonderful character passionate about becoming a filmmaker.

Let us keep pressing for diverse toys, books, and videos with our voices, and supporting companies and authors who create them with our business. Because, as you and I are well aware, it’s not just a matter of economics; it’s about representation.

And as my friend Will Yu continually reminds us, #RepresentationMatters today, and always.

Banging a trash can helped the 2017 Houston Astros - sadly, my favorite team - to cheat their way to a championship. The owner and players can say that statistically, the scheme didn't make enough of a difference to taint their title. But even a young child intuitively knows that the slightest illegally gained advantage is still immoral. We don't get to call it "only slightly cheating." In the same way, the Trump campaign openly solicited and exploited intel illegally stolen from American citizens by Russia's spy agencies. However slight, the advantage gained was real; to deny that is to rationalize what even a young child knows is cheating. Putin banged the trash can, and Trump rode the scheme to victory. And Putin's up to it again this year, and Trump and congressional Republicans (except Mitt Romney) hope to use it to their advantage once more. They don't seem concerned that what's being banged to death are our noblest values, our Constitution, and the Republic to which we pledge our allegiance.
I'm with @amyklobuchar! #AmyForAmerica #TeamAmy #CaliforniaPrimary #Voting
Love is in the ... sidewalk! #SunnyHillsHighSchool #ChalkArt #StudentArt #MathTeacherLife
If this were the #DemocraticParty ticket against Trump-Pence in the fall, LOOK OUT #AmyKlobuchar #CoryBooker #AmyForAmerica #TeamAmy
A comment I made on my #SunnyHillsHighSchool classes' Instagram (@jointhemathside): Being a student of #mathematics is usually treated as an individual endeavor. And to some extent, it is; you have to put in some time on your own to learn the stuff. But we all know the feeling (or you will someday, believe me) that everyone understands what the teacher's talking about except you. So help each other! Find your #math homework buddy or study squad. Some of the most productive tutoring sessions involve pairs or groups of students going over problems with me. Math should be done "in community" with other students, at least part of the time. The insights and encouragement that you share together can benefit everyone!
The #Astros *and* #ManCity??? #caught