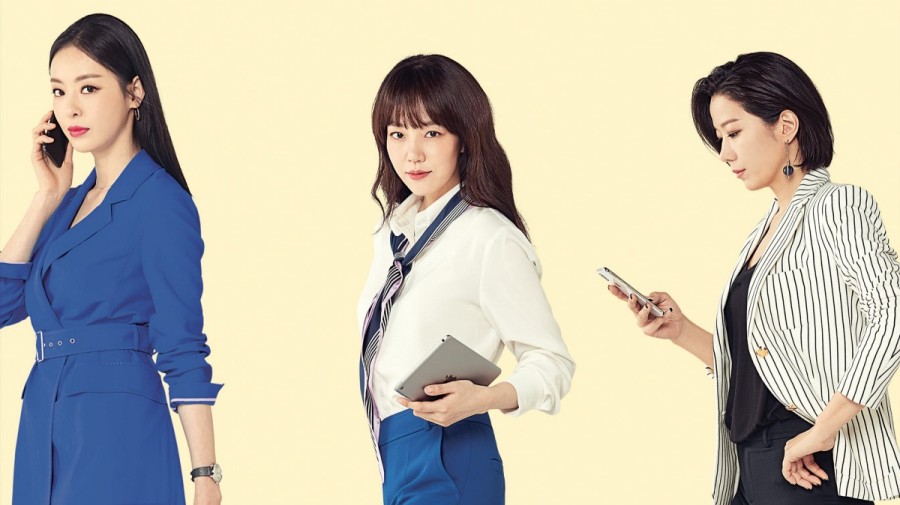 Dying for a new girl-power, women-centered TV series to quarantine-binge? They can still be hard to find, sadly!

But while counting down the days of (your choice) summer vacay or (hopefully) the Trump Administration, you could bless your own socks off by diving into K-drama Search: WWW, which I reviewed on this blog a year ago. I’ve been thinking about it again since my current K-drama It’s Okay to Not Be Okay, while really good in a lot of ways, lacks an element I really like in my TV series – a macro-story with high stakes for society at large. That’s true whether I’m talking about K-dramas, period pieces, or superhero shows. Search: WWW pulls off the balance between big and small really well, giving us viewers not only the interpersonal drama, but also a suspenseful corporate and political thriller.

I like the series so much that I’m reposting the majority of last year’s review here. If you’re still not convinced, check out this extended preview, with minor spoilers:

Now rejoining my review of Search: WWW, already in progress:

Though I don’t understand Korean, I caught it on Rakuten’s Viki.com with English subtitles. (Rakuten is kinda like Amazon.com in Japan. And as of this date, it isn’t yet on Netflix, but I know it’s available to Netflix users overseas.) The story centers on three women, each ranking in the top echelon of leaders at massive South Korean internet search companies similar to Google. It’s a world I have some familiarity with through my contract work a few years ago with an excellent SEO (Search Engine Optimization) company.

I learned of this series through the YouTube channel of my favorite K-pop group, Mamamoo; their new song “WOW” featured in several episodes. You can see the official music video, consisting of clips from the show, here (but be forewarned, there are minor spoilers):

I don’t know how Search: WWW compares to other K-dramas, but it feels quite feminist to me. I’ve heard that in the past, Korean dramas tended to be quite male-centric and even misogynistic, though things have improved in recent years. But the three lead characters in this series are women doing things that we don’t often see them do in film or on TV, even in supposedly more egalitarian Western media. For instance:

Really, these characteristics most frequently are associated with male protagonists in popular TV and films; the epitome of this in my generation is Han Solo from the original Star Wars trilogy (Episodes IV – VI). So it’s refreshing to see the female main characters in Search: WWW depicted like this, especially because women who embody these qualities in real life are widely condemned as too aggressive, overly masculine, or just plain bitchy.

But in this series, they’re the romantic leads. And over 16 episodes, a complex portrait of each emerges:

What’s more, these romantic leads become the she-roes you root for, as the overarching narrative takes on a bit of the flavor of a Michael Crichton techno-political thriller. The three women become drawn into a struggle with corrupt officials, both within their corporations and at the highest levels of government, that are trying to manipulate their companies’ technology for political and financial gain. It’s a very believable crisis with the potential to affect almost every internet user in South Korea, and in real life, it very much reminds me of the current U.S. administration’s strongarm attempts to intimidate internet content providers.

It’s this larger story that I enjoyed the most. Next to that, I liked the interactions between the three leading women, even those that were bitterly contentious from betrayal. (This show passes the Bechdel test with flying colors, with the three leads’ conversations with each other almost never being about a man.) And I confess, I did like the romantic stories overall – though, as I’ve said before, the background music was sometimes on the cheesy side and the relationships took forever to develop. (More than once, I said out loud, Can you just kiss him already???)

Oh, and I laughed quite a bit, too, especially watching actress Lee Da Hee’s character Cha Hyun. She’s fantastic, and from what I’ve seen on K-drama blogs, a lot of other viewers apparently feel the same way.

And as a further confession, I’ll admit that I almost cried watching the series. But just once.

And do me a favor, will ya? If you do watch the series, tweet me at @eughung, because I haven’t found many people to discuss the show with!